This week, we're interviewing Elyse Ohryn — or SpaceCat Senpai — a cosplay maker from Plymouth, MI. Elyse creates incredibly detailed and inventive cosplay costumes honoring her favorite characters from television, video games, and other media. After designing and patterning her custom cosplays, she uses a range of skills from sewing or gluing fabric to grinding foam to cutting on her bandsaw to turn them into reality. If you're a brand that sells to cosplay costume makers, this 1-on-1 interview with Elyse will give you some important insights on how to connect with makers like her.

My name is Elyse, I’m an art director for ATA, and I make cosplay. It’s short for “costume play.” Cosplay is when you create a character’s costume for yourself and you become that character for a day.

How and when did you get started making cosplay?

About 11 years ago, I was invited to a zombie convention. We dressed up as zombies, all bloody and gross, and from then on I fell in love with conventions and dressing up. I slowly started making more and more costumes and armor based on characters I love, and also people asking me to make costumes for them. It escalated from simple, low-key zombie conventions to big, 70,000 people cons where there are the most intense costumes you’ll ever see. More of my close friends I have made through cosplay than anything else.

What kind of research goes into making costumes?

When I consider new materials, the first thing I do is I always read reviews. I have to make sure that everyone who bought that particular brand thought it was good. I trust what other people say based on their experience. I belong to a lot of Facebook groups and online communities and that’s where I learn from other people’s mistakes in order to avoid running into problems. I always put out my mistakes if I’m explaining how to do something or answering questions, too. I get questions daily about how to make armor from friends and family because they’re curious.

The process is very fun. The clean up is not, but the initial process is great because it’s a lot of problem solving, like any art is. You see something that’s 2D in a game or a TV show, and then it’s your job to take that 2D thing and make it 3D, and not only that, but it has to fit you. I’ve seen people make full muscle suits because they want to be The Hulk, or they have to make stilts because they’re not seven feet tall like some characters are. You can do the character’s exact thing, or you can do a mix-up of whatever shows you like. It’s kind of whatever that person wants to do and that’s the fun part, just being creative, going to a convention, and seeing everyone else who is creative. It’s a hodge-podge of people who are creative nerds and it’s the best.

I keep a list of characters that I want to do, and eventually, I pick one based on where I’m going. Then the first thing I do is print out every picture I can find of that character so I have reference. From there, I begin to make patterns. To pattern, you can make a duplicate of your arm by putting duct tape on yourself and cutting off the “cast”. Then you have a pattern of your arm to help you make something that goes on it. For something like your shoulders, you can’t really duct tape it, so you sort of just have to keep cutting patterns until you find what you like the most. Once you have the exact pattern, you begin to cut it out of the materials.

I do a lot of sketching to plan my costumes. I generally sketch when the character is something that comes from my mind. So, for example, I wanted to do an armored Alice from Alice in Wonderland. The idea was to create Alice as if she were going into battle. In my head, it was as if Alice used pieces from all of Wonderland to make her own armor, so I had to draw out what it looked like and make sure that it was balanced. You don’t want to be top heavy or have the bottom be more interesting than the top. But I was just having fun with it. You make it your own spin so when someone sees you, they appreciate the creativity that you put into it. 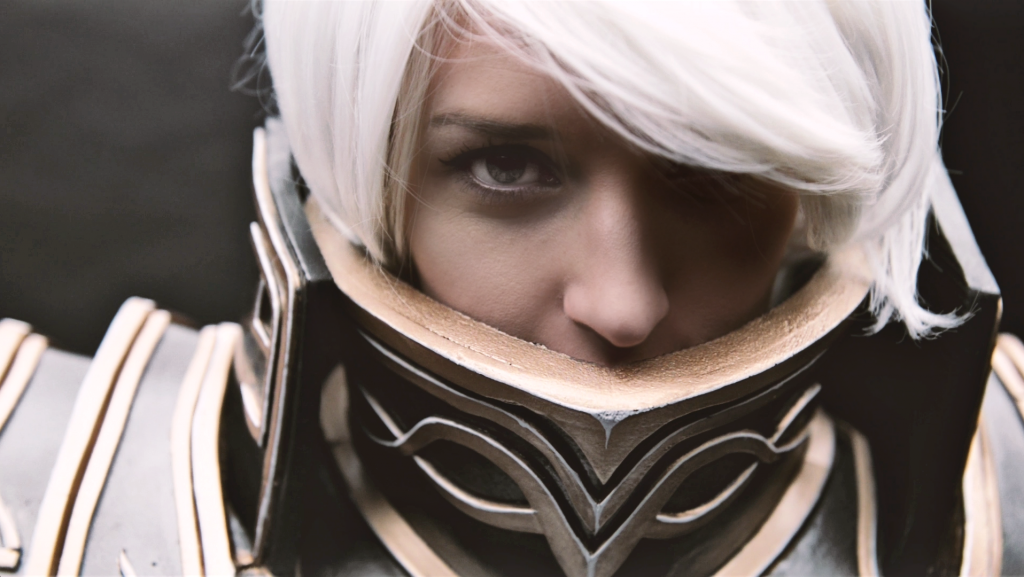 What materials do you use and why?

The materials I use are pretty forgiving. I use foam garage mats to cut my patterns out and glue them all together, and then I use heat to form them. I also use a lot of Custom Wrap [rubberized car paint] to seal the foam with a rubber coating so you can paint it. If you paint straight on foam, it just sucks up all the paint. The Custom Wrap covers and weatherizes it, and then you can paint it. From there, you can spray paint or use acrylics to put color onto whatever you’re making.

How do you interact with brands that make the materials you use?

I find learn what works best through trial and error. With spray paint, for example, I’ve used probably six different companies that make spray paint and when I find one that doesn’t crack, is stretchy, can be worn for a long time, won’t harden too much, I generally stick to that brand and I’ll tell everyone else that’s what I use and give my reasons. All the other spray paints, I’m sure they’re good for what they do, but in particular there are companies that work well for cosplay in general.

How do you choose one material over another?

I personally prefer to use materials that are easily found wherever. I make mistakes all the time, and if I’m using something I bought online, I’m going to have to wait until I can get more of it shipped to me. I’d prefer to buy stuff in stores, and anything that’s cheap enough to make mistakes with. Materials that are durable are also important. The first piece of armor I ever made was made of craft foam, and I found that it’s more susceptible to tearing or being affected by general wear. EVA foam is thicker and denser so it can take a lot of wear. I also found that through the many, many costumes I have made, that you have to make something comfortable so that you can wear it all day.

How much time do your projects take?

Generally, when I start a project, I give myself a deadline. Me, as creative, that helps me stay on track because like anyone, I get distracted. I have to give myself at least a month and a half for each thing that I’m doing mainly because once you get everything put together, there’s still coating it which takes time because each layer has to dry and then there’s painting it, and then there’s strapping it to myself which is something that’s almost as important as the armor itself. When you put it on you, you have to make sure it’s comfortable, it’ll stay, and you don’t have to mess around with it all day. I use nylon, Velcro, stretchy knits parachute clips, buckles, pretty much anything that is adjustable and depending on if it’s sci-fi or fantasy, will fit in with the character. You don’t want to use a parachute clip if you’re a medieval knight, you’ll want to use a buckle and some leather straps. 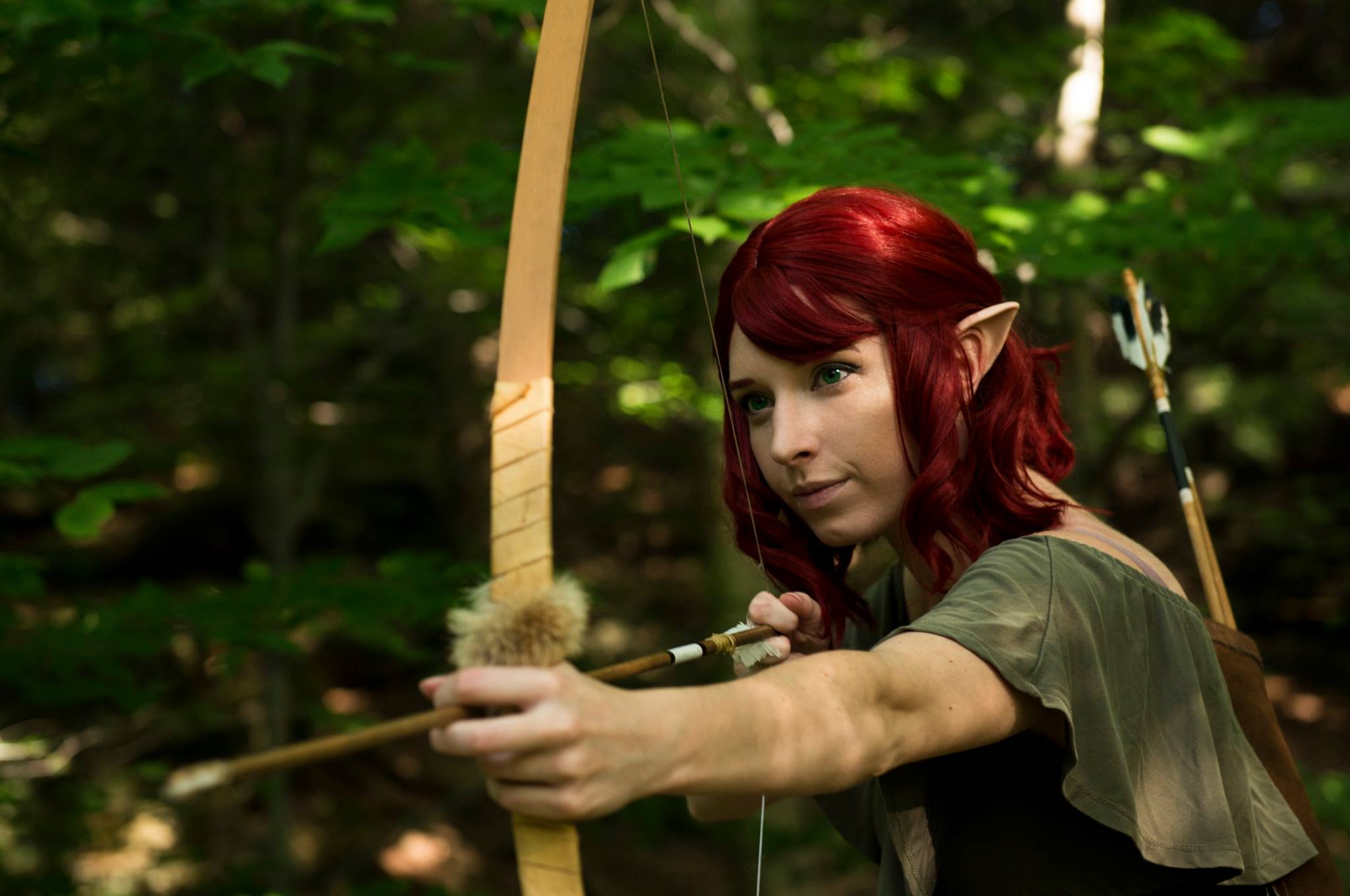 Where do you get inspiration?

I follow many cosplay makers online to see the way that they grow in their art. When people start using LEDs and smoke, or make giant bubbling cauldrons on their shoulders—those people go way outside of the box because you want to stand out at a convention and you want your hard work to be noticed. You want your entire month spent making something to be worth it. That’s part of the fun is someone saying, “You look great!” and feeling inspired because you were inspired. A lot of the people I follow, their stuff looks so professional and clean and that’s what I aim for: making my stuff look professional. A few random strangers have told me that my stuff looks professionally done which just makes my day.