Cosplay on Halloween: More Than A Costume 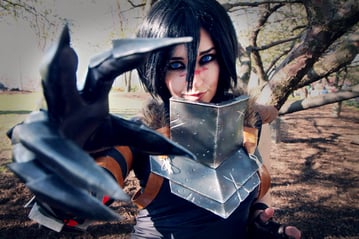 Cosplay and Halloween have one obvious thing in common: the costumes. But while Halloween is a seasonal celebration (with a lot more candy involved), cosplay is a year-round hobby that stands for a lot more than just dressing up. However, that doesn't mean that cosplay makers don't make the most out of Halloween (it is the most culturally acceptable time to dress up as someone else, after all). Some cosplay makers use Halloween as a great occasion to create new, impressive costumes to show off and enjoy.

But in order for your brand to make genuine connections with today's cosplay makers, you need to understand how cosplay makers take your traditional Halloween festivities one step further. In this post, we'll explain five important ways that cosplay on Halloween takes the holiday to a whole new level.

Cosplay: More Than a Halloween Costume

If there's one thing for you to take away from this post, it's that cosplay is a year-round hobby, but many makers love the opportunity to show off their skills around Halloween each year. Halloween events serve as great motivators to turn their ideas into reality, and cosplay makers often pay tribute to characters don't get the same recognition as traditional spooky monsters or pop culture phenomena. However, craft- and Halloween-focused brands in general can certainly reach more cosplay makers by learning more about their needs and motivation. By acknowledging the quality and support cosplay makers are always looking to add to their process, your brand can become a valuable part of what is (probably) a cosplay maker's favorite holiday.