This week, we’re interviewing Shannon Casey, a visual artist and painter from Hudson, OH. Shannon’s whimsical art style takes on subjects such as human figures, moons, and self-portraits. In her creative process, she uses art materials like oil paints, paintbrushes, pencils, turpentine, and canvases. If your brand markets to painters, this 1-on-1 interview with Shannon will give you some important insights that can help you connect with makers like her. 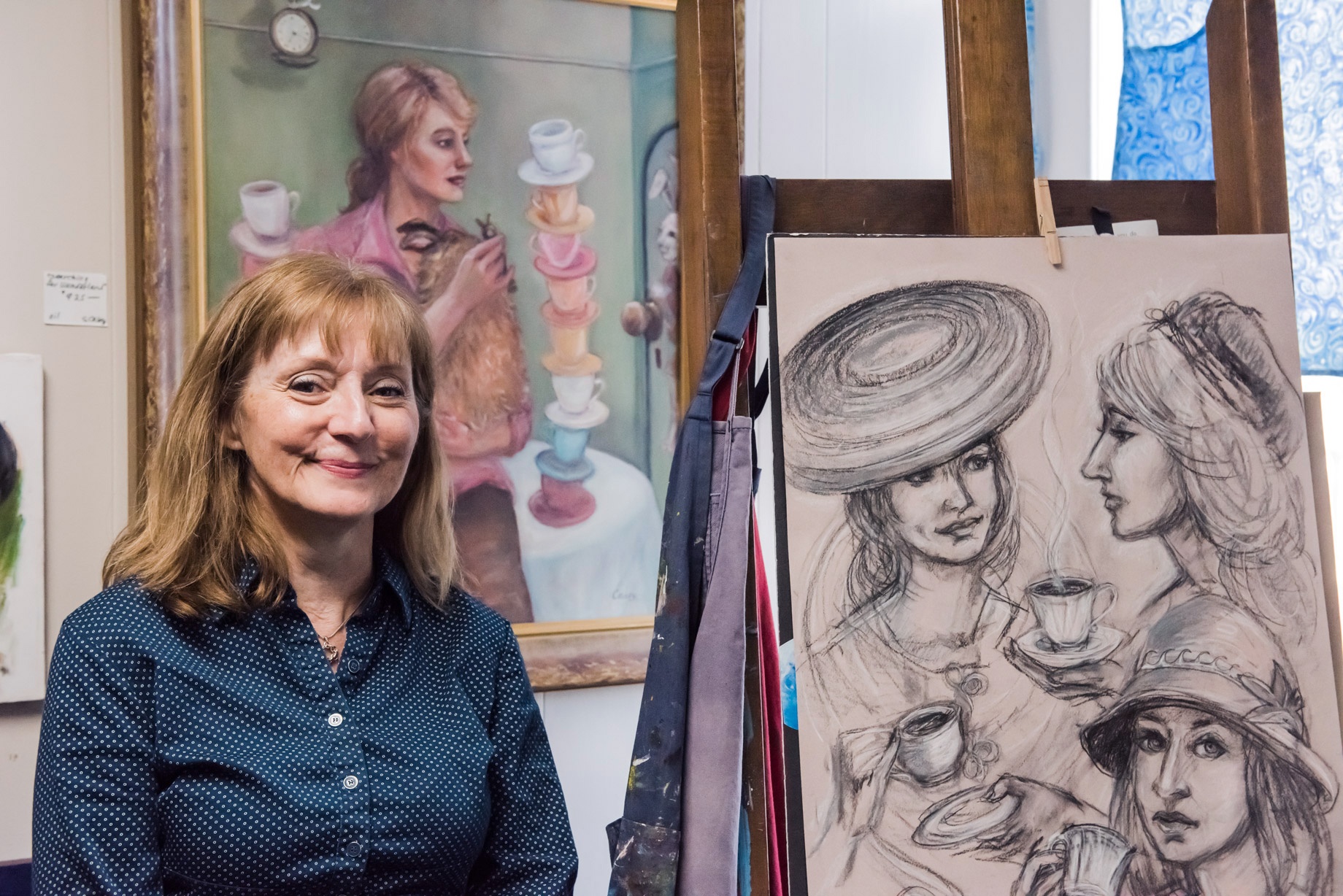 My name is Shannon Casey and I am one of three artists at Uncommon Art in Hudson. I’m a painter, my work is based on the figure and portraits. I love to do faces and whimsical moons and anything that has a face is usually mine here.

How and when did you get started doing this?

I always drew on the side, when I was in college, I started as an art major but ended up flip-flopping it and majoring in journalism. I was a writer for quite a few years, for about 25 years, I was in advertising. I was a copywriter and I always did it [drawing] just a bit on the side. And then, about 20 years ago, I just really wanted to do more with the art side of me, I really hadn’t explored it. I was doing life drawing classes up at the Cleveland Institute of Art, those were like Wednesday night classes that you could just go and work from the model, and there was a flyer with some continuing education classes that they were offering for the summer. So I took one of the classes and the instructor told our class that if we were interested, we could apply to the school, put together a portfolio and apply to the school, and if there were openings in his regular class during the year, we could get in. So I did that and I got in. So I was still a writer, I was still doing advertising but I started doing his class, so I was able to do it for three fall semesters. I was a studio art minor at Kent [State University], but I just didn’t go that way, I didn’t want to do graphic design or illustration, I didn’t think I could make a living doing studio art.

What kinds of steps does a typical painting consist of? What's your personal process like?

I usually plan them out, I draw them in my sketchbook or I have an idea, and then I do just little sketches. Once I start with a canvas I’ll do an underpainting, so I’ll do it in acrylic and just sort of map it out. If I’m going to do any collage in the background or any like built-up areas that I’m going to put gold or silver metal leaf on it, I have to do that in that first step. And then after I do my underpainting, and then I know where the broad colors are, I do a lot of things with the night sky so that acrylic lets me cover big areas. But then I don’t like doing acrylic for the final because I don’t think I can make it as nuanced and I can’t fine-tune it the way I can with oils. So then I do oil on top of that and that’s when it really starts coming together. But I’ll rough it out first with acrylic. 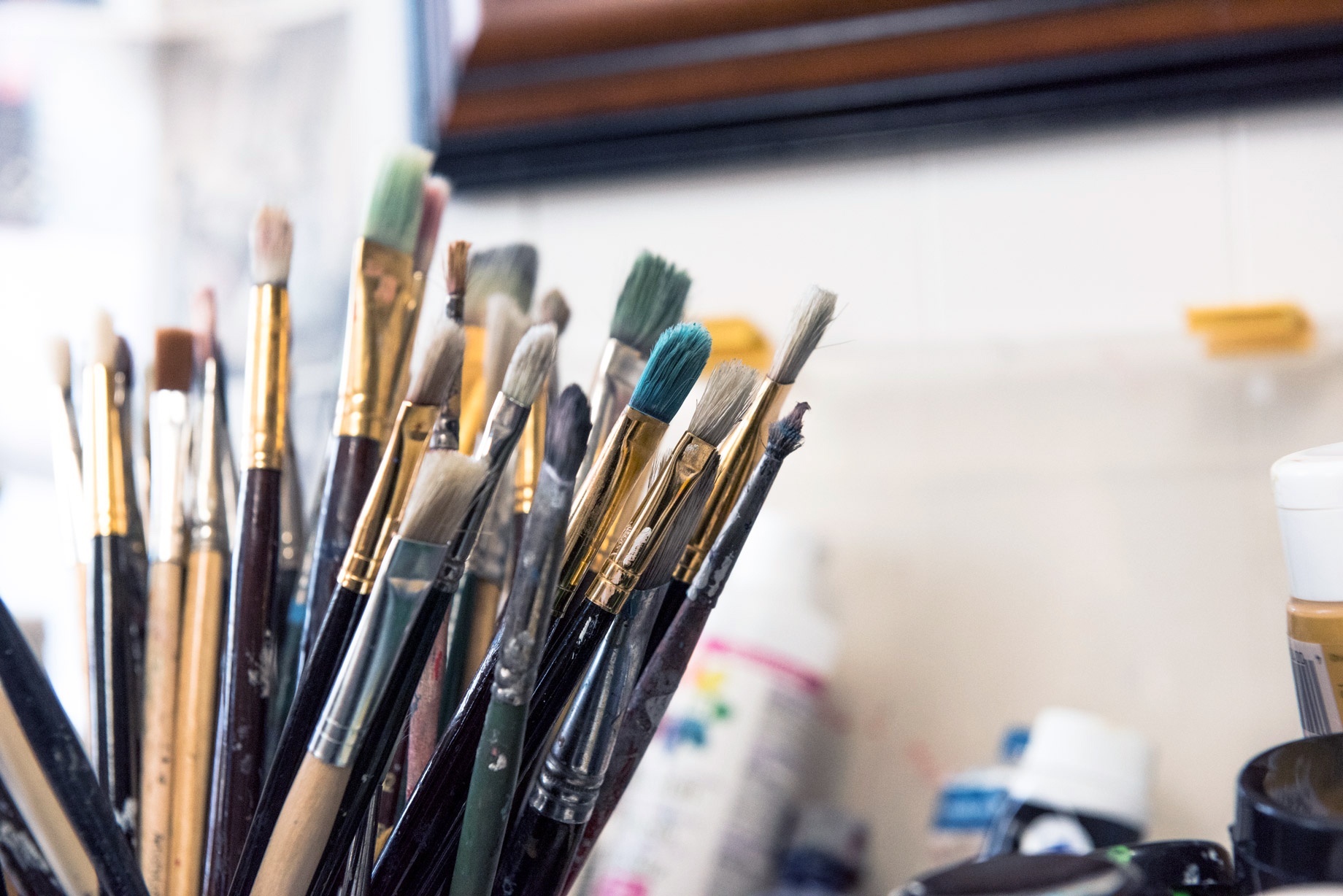 What's important to you in a product? How do you choose which materials you're going to work with?

I have so many oil paints, people give me oil paints. If they’re in a tube and they’re sealed, they really don’t go bad. So I have tons and tons of oil paints. But I don’t want to use toxic materials, so with oil paints you use turpentine or derivatives of that, but they give me a headache. So I use natural stuff, I use stuff like turpenoid, it’s natural. I’m in an enclosed space and I think about that and I don’t want all that hurting my brain. So I try to use things like Liquin and then the turpenoid, safe stuff.

It’s the colors, it’s more about the colors and which colors I want to use. I used to buy really nice brushes, and I just grind them down to a pulp and sometimes I forget to clean them. I know how I work and I’m messy.

I have certain canvases that I like. I have a certain size, I like the ones that have the real deep sides. It’s more about size of canvases. But paper, because I also teach [teenagers, tweens and some adult students], I happened upon this sort of toned paper. I’m picky about my pastel paper too. I’m picky, I like the color and I like the texture.

Is there any research involved?

There usually is research. Like I said I like to do things on the night sky, I have lots of star books. There’s one hanging on the wall now and it’s of a young woman, golden haired, and she’s sort of slouching in a chair. It’s based on this constellation called Coma Berenices which means “Berenices’ hair” and it was a constellation. She was an actual queen and it’s the only constellation that was based on someone from history, it was a queen that had this golden hair. So I do research, I pull things from poems, mythology. [My paintings] are definitely related to things, I have a series that I’ve started based on this little autograph book I found about all these messages to a little girl Lydia. Things are rooted in things I’ve seen or read. Some of it’s from the Bible. We look at the stars and you see order and creativity and just beauty. The stories of the stars, people told those stories, the Greeks and the Romans. But sometimes I put another spin on them. So Icarus and Daedalus, I did like a night flight to the moon. Then I have a couple of the Seven Sisters, the seven daughters of Atlas, and they’re with Major Tom. So sometimes they’re based on songs too, I’ll hear a song or lyrics and I think “That would make a great painting!” Sometimes it takes a while to figure out what the visuals are going to be and I kind of come back to things.

Do you sell paintings online?

I have to say I would rather people come in person and see what I’m doing. 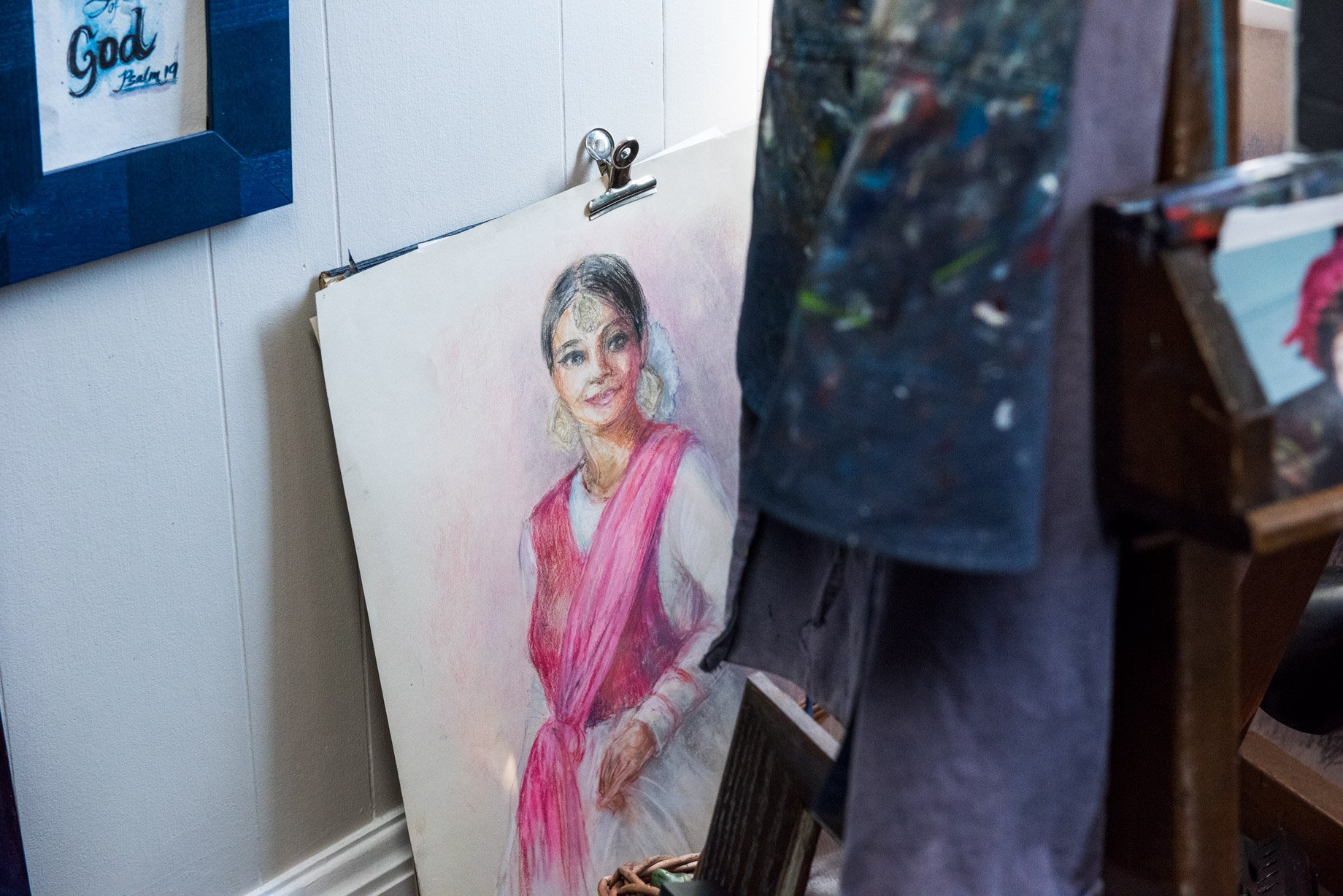 On average, how much time do you tend to spend on a painting?

It really does depend on the size. I’m a fast painter. Because I do an underpainting first, I can get a lot done. I think it’s the advertising background, I’m very deadline focused. If I have a deadline, I work until that deadline. There are some that, they’re done when they’re done. And there are others that I’m not quite done with. As an artist you’re always learning and you’re always growing. I can look at paintings I did five years ago and I can say, “Well that, that needs changed.” I don’t want to plateau, I want to keep learning and understanding.

Outdoor shows I do a little bit, not a lot. I do the Hudson’s Art on the Green here. And then I did Yankee Peddler for five years, I didn’t do it last year but I may be back this year.

Karen and I are going to be doing a show at the Cleveland Botanical Gardens in the spring, and then Akron Art Prize. And then I just did a talk at an art club up in South Euclid. And I did a project at Great Lakes Mall. They’re doing this six-month Canvas Project and they have three artists each month and we had these great big 4 ft. x 5 ft. canvases and then we had to work onsite. It was really fun.

What is the most rewarding part about what you do?

Bringing the ideas to life. Taking an idea that’s in your head and then seeing it work. It’s fun to hear people’s comments too. That’s fun too, I think mine are pretty off-beat. These are not landscapes, some of them are pretty odd. But somebody will really connect with it. At Akron Art Prize, there was a woman there and she loved it. She read the poem and she just really got where I was coming from. It was really fun.

We need beauty in this world, there’s so much weirdness going on. Artists need to be true to their craft and be true to the vision. And it’s not just for artists, it’s for people who create songs and poets, we just need to be creative. It’s such a gift to be able to do what I’m doing, especially since this is my second career. I was doing something completely different. If I don’t get these ideas out of my head, then they’re lost.

It’s super supportive. Having this place [with Karen and Dana], it draws the artists, they kind of say, “Well what’s that?” All ages. This is my third studio. The first one was like this little 10 x 10 cubicle space and that was at Peninsula Art Academy, which is a co-op art gallery. I gave myself six months to be an artist. 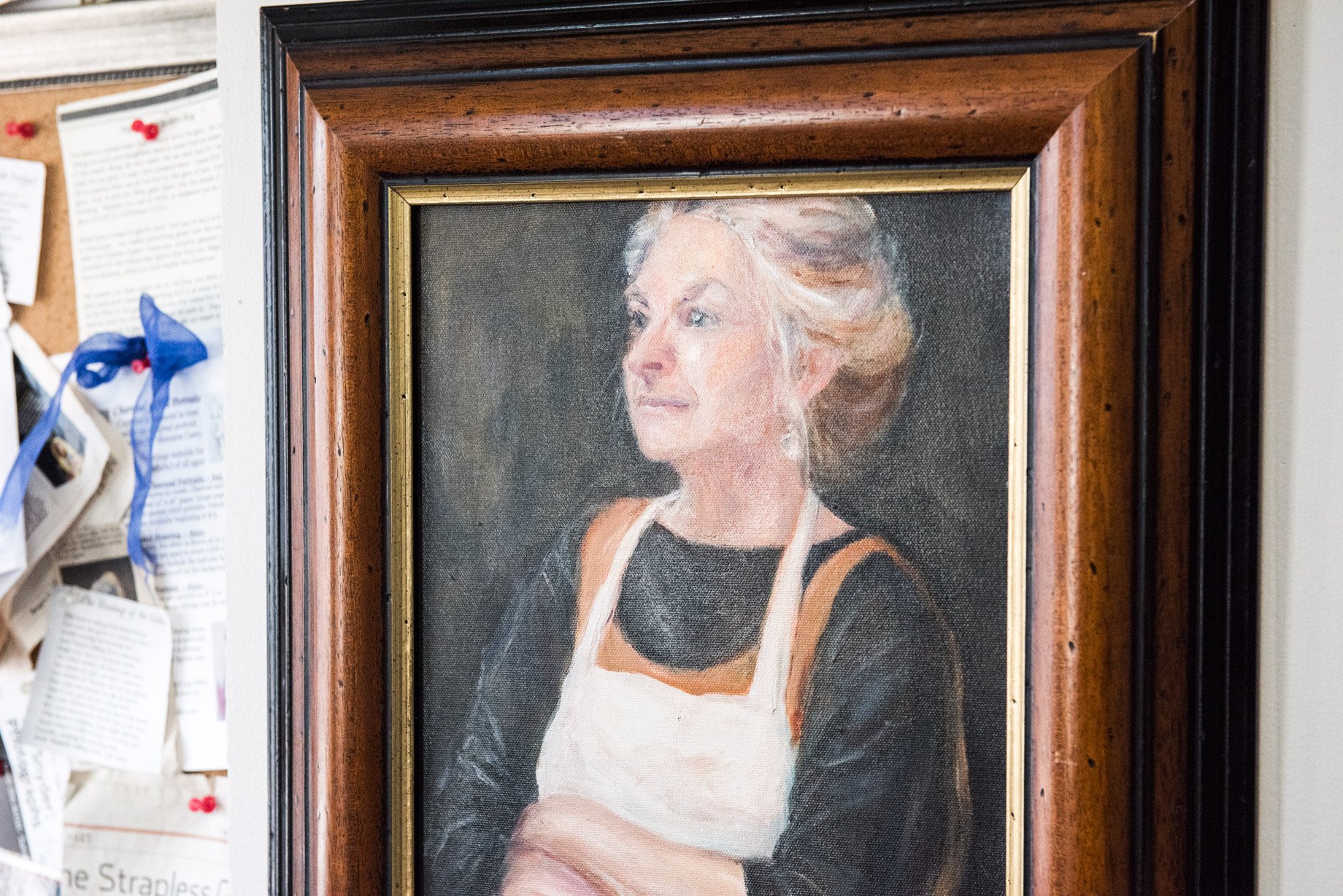 How do you deal with problems or challenges that arise?

I think sometimes you have to put them on hold. You deal with them, but if it’s like a problem with a painting and I can’t figure out what to do, I might step away from it and do something else with it, or turn it upside down, look at it in a mirror, take a photo. I did a portrait of a couple, and she turned out fine, I was working from a photo which is sometimes not great. I just had a really tough time with him. He had a very strong jaw, and he looked like every movie star. He looked like Paul Newman one day, he looked like Kirk Douglas the next. You have to be able to step back and see what is the big picture. Sometimes you have to just say, “I’m going to put this one away.”

What's next for you?

The tree show that Karen and I are doing, so I’ll be getting more of those going. We want sort of a big body of work for that. The immediate is Christmas, so I have a lot of stuff here. I have a couple of series that I want to do.

I have a student now who’s 90. He called me out of the blue and said “I don’t know if I’m any good, but I want to take drawing lessons.” He comes about once a week every other week, but he’s also in a poetry class and he does creative writing, and he’s really good.

Learn more about Shannon and her Studio online: 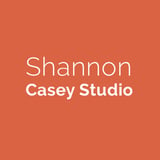