This week, we’re interviewing Jason Horinger, a custom woodworker and vintage curator at Birchwood Supply Co. in Akron, OH. Jason decided to transition from a teaching career to pursuing his passion for woodworking and the maker community. He started out working with simple tools, but has upgraded along the way to using table saws, drills, planers, and more in his projects. If your brand sells to woodworkers, this 1-on-1 interview with Jason will give you some important insights into how to connect with makers like him.

I’m Jason Horinger, and I am the owner of Birchwood Supply Company. I’m a designer, I’m a curator of a brick-and-mortar shop of vintage home decor, and I like finding cool things. My custom design work spans a lot of different areas. I work with reclaimed material, that’s the big thing I focus on: reusing and not adding to waste. I originally started with simple lighting work, just pendant lights. Now my work encompasses the whole scope from lighting to table work to wall pieces. Right now what I’ve been doing a lot of is custom tables and centerpieces in people’s lives. I want to be able to broaden and be accessible to as many people as possible.

How and when did you get started making and curating home decor?

It’s been a bit of a journey; hard evidence goes back to about five years ago when I was doing another side project with a friend of mine I taught with, and that was a creative endeavor that I was able to unlock a lot of things with. My friend is a designer/photographer and cultivated in me how to find what my aesthetic is. I used to be a teacher, but I look at what I’m doing now and it’s an entire lifetime of experience. As you become an adult, you start doing things you’re told to do, but then you start to educate yourself more.

What materials and tools do you use to make your projects?

As far as tools go, it’s simple stuff. I don’t have an elaborate production line. My philosophy that I adopted early on was this idea of starting where you are. Sure there are things I would like to have and do, but if you look at my workshop, it’s a simple setup. I have a circular saw, table saw, sometimes a hand saw, drills, things along those lines. Depending on plans I have, I get into planers and joiners and a lot of other woodworking tools, but when you get confined in terms of space, you decide what you really need to do. I stay true to what my roots are and that comes down to the materials I use and letting them tell a story. 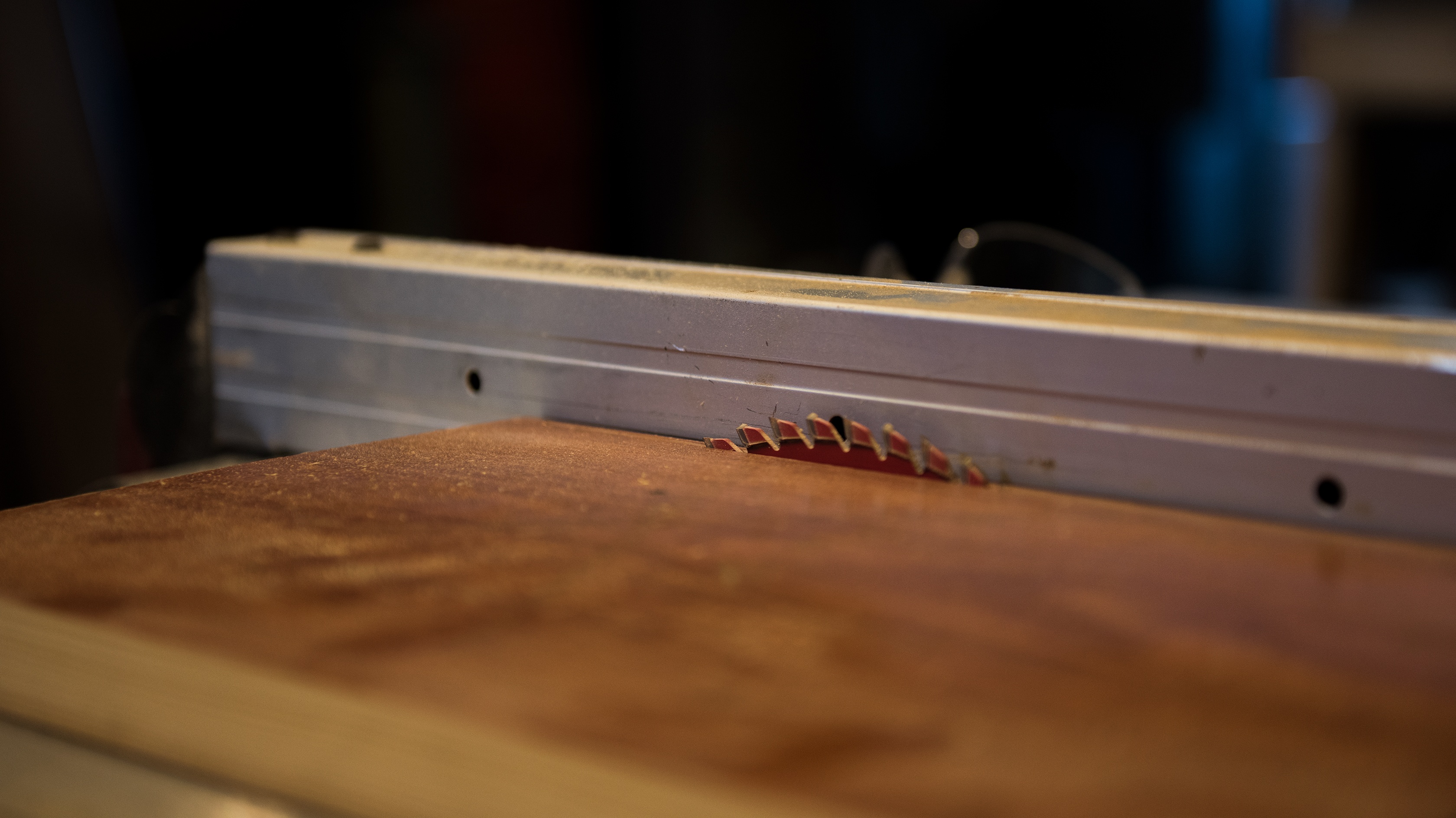 What are your feelings about the effect of the Maker Movement?

I’d say that entire story that’s been unfolding within the last 3-5 years is incredible. I appreciated it as a consumer, being able to talk with somebody and knowing what they poured into what they did. It’s taken me a while, and I’m knee deep in it now, but it’s hard to mentally and emotionally and physically understand that I’m able to be that for somebody, When I started the business, all I wanted to do was bring value to people; I loved that. I’m seeing a huge shift happening with people, a return to an authentic lifestyle: knowing a maker, knowing where things come from. The box stores have a purpose and that’s great, but there’s been a detachment there for so long, and that’s significant.

It’s a slowing down process. Technology is great. We’ve unlocked so much and can do it all at our fingertips, but there’s a quick spiral that goes out of control and things start to move too fast. There’s a detachment from everyday life, but I want people to walk in the shop and I want this to be a community event, but an ongoing thing.

My grandfather died when I was a year and a half, and for me, he’s a part of this. I feel like he would be proud of it. I worked for my uncle’s small family business growing up, and he was a maker. Part of the reason I’m doing this is because of him. My mother is an amazing woman, and it wasn’t until later in her life she started painting and putting things up around the house. Then she saw me go to shows and do things in the public eye, and she started asking questions. I pushed her a little and said, “Let’s get you into something.” It doesn’t have to be something big where you’re paying $300 for a space. You can just get your stuff in front of somebody. It’s taking that step and being uncomfortable with everything you’re doing but trusting your process. Ultimately, people are going to be receptive to it. That’s the Maker Movement: that uncomfortable nature and unlocking creative limitations.

What's your favorite part of the process?

I enjoy the process of sanding things because the material I work with is reclaimed, so that has decades of character. A lot of times, that character is bad, so you have to get through that, but it’s the process of working with your hands. But it’s the time I put into things and the craft that I really enjoy because there are a lot of people out there who know a lot more than me, but that’s the joy in the process. Obviously the end result is the most important, but at the end of the day, it’s going from nothing to a beautiful, tangible piece. For me, that’s incredibly rewarding. 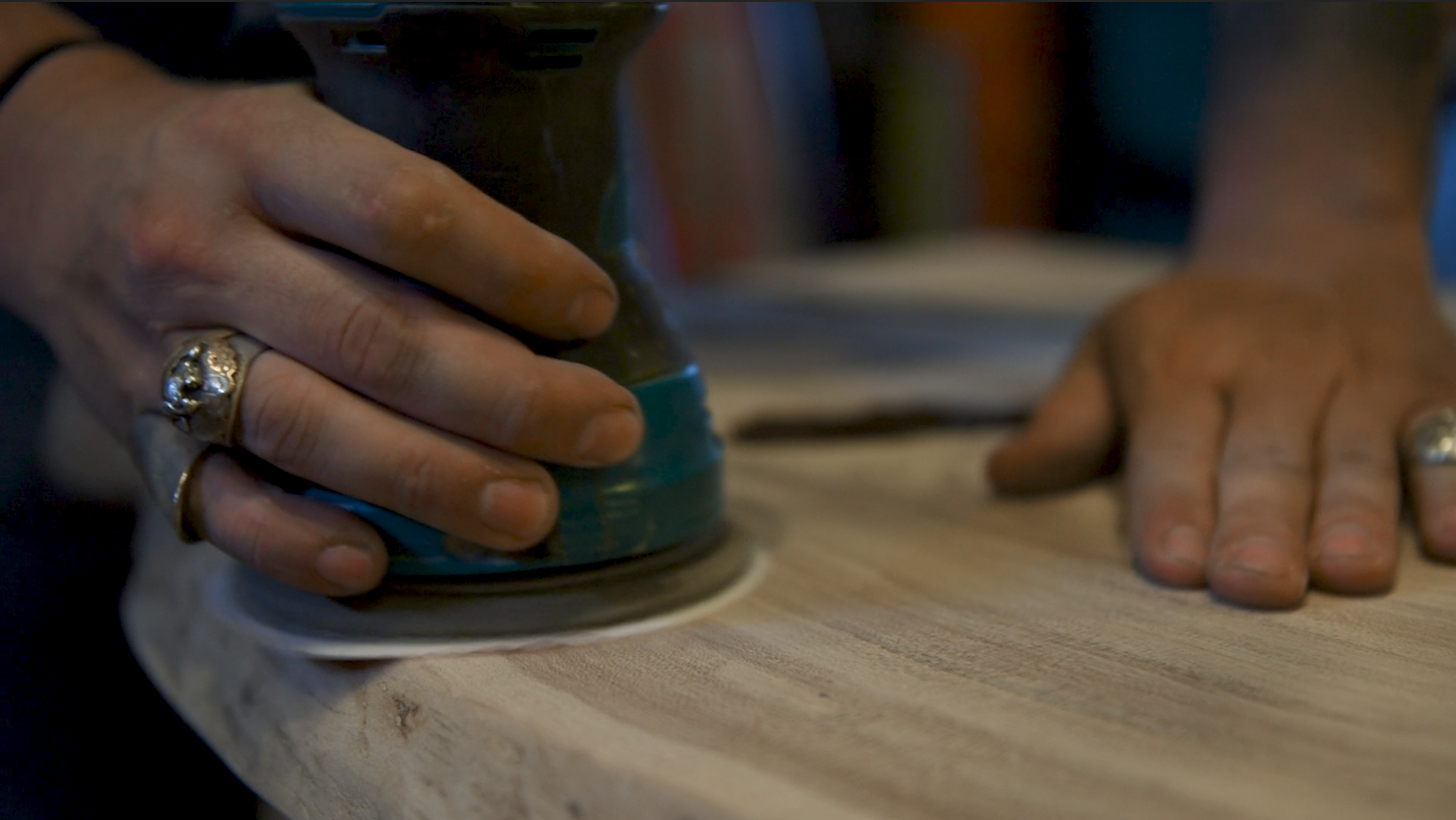 What resources help you learn more about making your projects?

I have some close friends of different walks of life that continually challenge me to do better. I think that’s once place you learn, from your network of people that you trust and can bounce anything off of. Two, I think in the world in which we live, social media is massive. Social media for me is where I poured a lot of my resources, and that usually comes down to time. It’s unlocked this world of makers. And sure, you’re spending a lot of time staging that stuff and you snap one photo for Instagram without showing the craziness of your shop around it. Social media is an incredible tool when somebody posts a YouTube video with a how-to, like woodworkers and makers are doing. Especially if you’re someone who has a lot of experience and was an apprentice of some sort, now you can explain how to biscuit joint a plank and things like that with a YouTube video. Now, if someone else watched the ten minute tutorial and has the tools, they can jump in the workshop and go. That’s huge for accessibility to knowledge and people, and I’m starting to become that in a way, having grown an organic following with my business, and that’s hard for me to wrap my head around.

How do you connect with other makers?

What I’ve seen is that in other industries is that there’s a lot of competition, and you won’t share things. In the maker industry, I’ve found that there are insanely supportive people from all over the place that want to see you succeed. I think there’s a shift in the understanding of business and competition and what we can bring to other people. I’ve always believed there’s enough room for everybody at the table. A lot of folks that are selling vintage doing what I’m doing, and we have value to bring to each other’s lives. 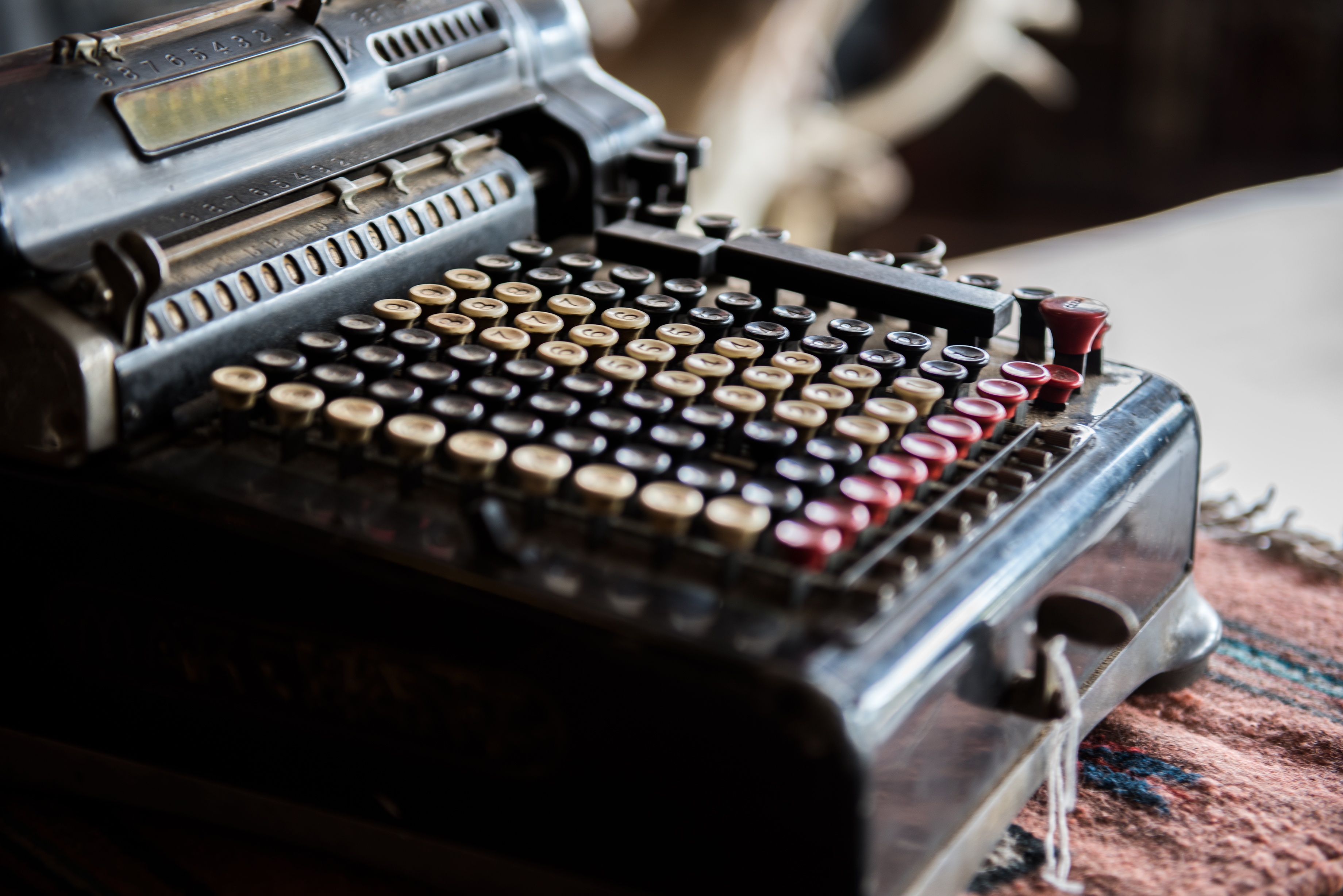 How do you approach challenges in your work?

For me specifically, that’s been the fun part. Whether it’s something in the shop, a question of where to put things, or a design project, you have to have spent enough time knowing yourself and how you do it to trust your process. You know when it’s time to step away for a day, a couple days, depending on your project timeline. I think the most important part is to know you and how you work. Some people are great Type A personalities that work six months ahead and ship out and do things step by step and build things over time. There are other people, and a lot of makers are like this, that work great under pressure. That’s where the creative juices flow, when you’re backed into a corner. Procrastination has a negative connotation, but I look at it as building my process until I’m ready to get my hands dirty. I build things in my head for weeks/months on end, and I remember every step. But some people have to write it out and some people have to do it by hand through the process. Then you find who you can reach out to because they know more than you, who can you go to with an authentic heart and say, “Teach me.” Nobody knows everything there is to know, I don’t care how skilled you are in a trade, there are still things to learn.

Is there a lot of trial and error involved?

That’s all it is, any day of the week. As someone who is self-taught, I’m not approaching things from the viewpoint going through all these steps and doing things in order. I do things through a different process. I appreciate that about myself. It’s not the way that someone else would do it, and the product will be different because of that, but it’ll be me. 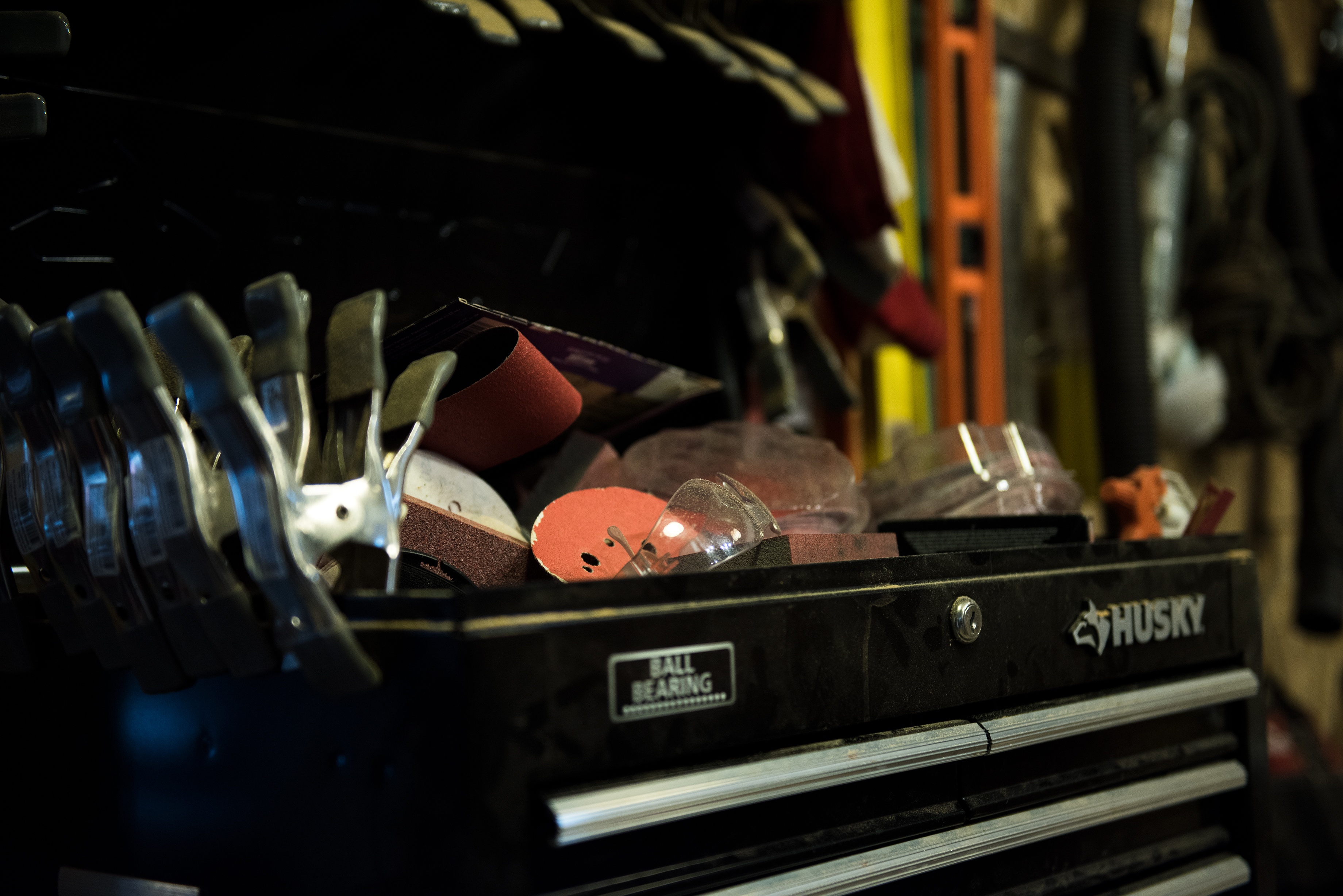 What motivates you to keep going?

The driving force for me every day and the reason I decided to jump into this are my two- and four-year olds boys. I knew where I was in life, and I was comfortable. To uncover who I really was and to do what I needed to do, not only as a father but as a person, I had to step out. The recurring thought I had was that I wanted to give my two boys an example of not giving in to fear. I knew I had to be uncomfortable, give up a steady paycheck and the comfort of working for someone else with a safety net, and move to being self-reliant. I didn’t do it so they could inherit this; that’s down the road. I wanted them to have the example of their dad finding what he’s made of, and I want them to not have that scope of just success and failure. I want them to do what their heart tells them to do, regardless of the obstacles in place. I’ll be there as they go through that process, not like an overbearing parent, but with some wisdom in that regard. 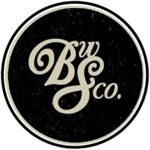