This week, we’re interviewing David Schuler, a visual artist and illustrator under the name Uncouth Barbarian. David’s illustrations take on a fantastical and even grotesque style, whether his subject is a poop-culture character or an original design. He uses a wide variety of art supplies like ink, pens, gouache paint, canvases, and paintbrushes of all sizes. If your brand sells to artists and illustrators, this 1-on-1 interview with David will give you important insights into connecting with makers like him. My name is David Schuler. I am a traditional artist. I make paintings using gouache paint and watercolor and acrylic and, most importantly, inks.

How did you start getting into art?

As far as drawing and stuff like that, this is kind of a “whole life” sort of thing. When I was in college I was exclusively a digital artist until I met this galley owner in Canton and he’s like “Well why don’t you try something traditional?” and I did and it was really relaxing to not be at a computer all day. So that was about 2012.

Wha is the process of creating a piece?

Get an idea, I’ll usually sketch it out (if I don’t have a really solid idea of how I want it to look I’ll sketch it out). And then I’ll move on to whatever medium I have around, so I’ll usually keep a good stock of illustration board, but I also use canvas board, clay board. And then each of those has their own steps, so it usually starts out with a drawing and then, depending on my surface, I usually move on to painting it, and that takes a little bit, and then I take it down and I ink it. Then after I’m done inking, I’ll go in and add some more paint, some white ink and some finishing stuff to give it some texture.

What type of materials do you use?

I use paint brushes. I prefer Winsor & Newton gouache paint, I like the Basics brand of acrylics, and I’m not really picky about paint brushes unless it’s for inking. If I’m inking with a paintbrush, I like to use a Winsor & Newton 00-style brush, it just makes really nice and smooth lines, it’s a really quality brush.

Where do you buy materials? What makes a good brush?

If the bristles don’t show up on my painting, it’s usually a good sign. If I’m using these brushes for inking, and I get a nice smooth, consistent line.

Do you do research for inspiration?

Oh ya! I have a whole slew of artists who inspire me, and then those lead to other people that inspire them. Sometimes I’ll just find somebody kind of at random, I found somebody that really inspired a painting that I haven’t even started yet, it’s drawn but I haven’t started actually painting it. It was inspired by something I saw at the Akron Art Museum.

How do you keep up with your skills: magazines, forums, social media, etc.?

Where do you get inspiration?

Animals, mostly. Animals and nature, emotion. If I’m really upset about something that’s going on with the government, which is almost every day now, it will fuel something. Or music. I’m always, always listening to music. 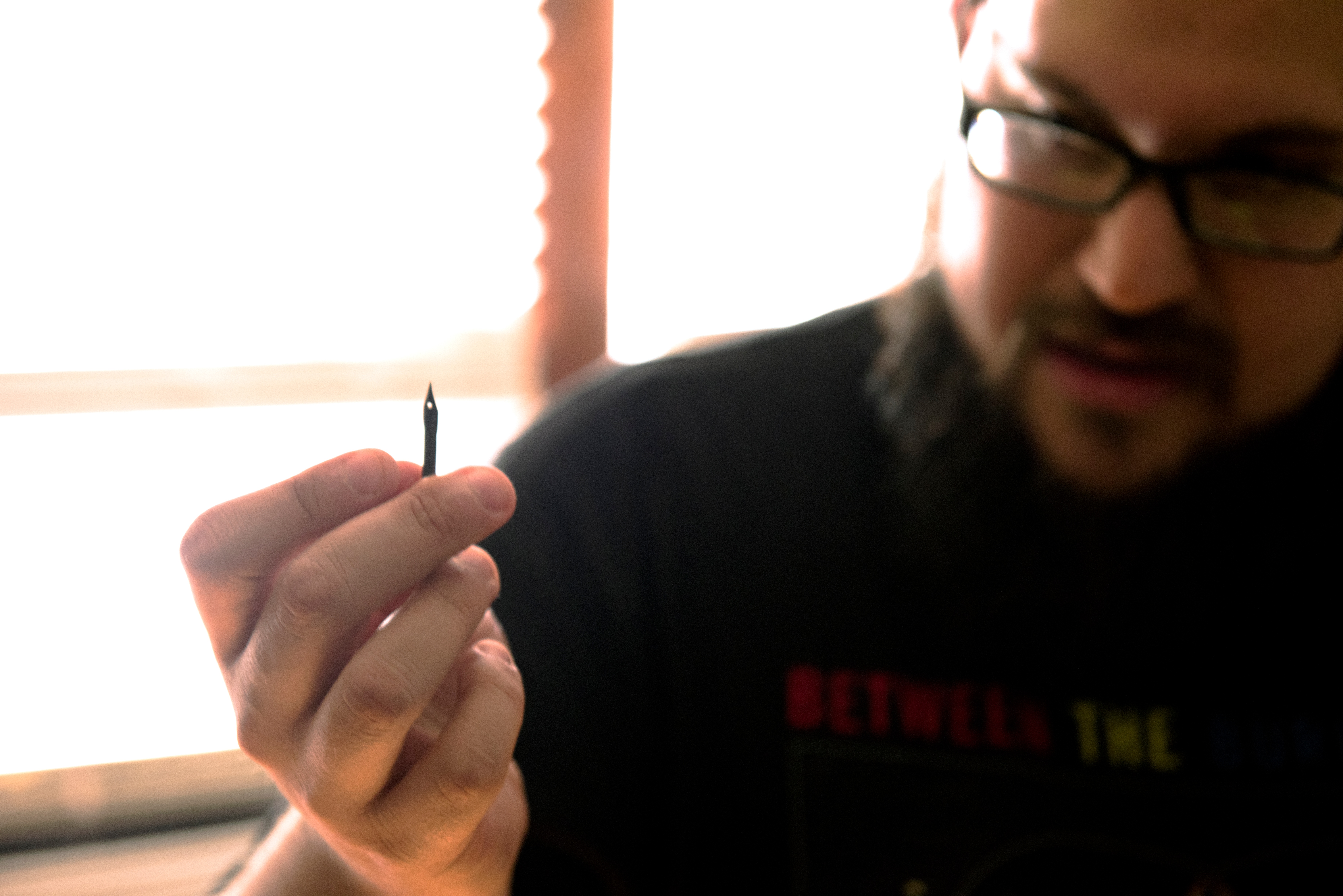 Do you do pop culture pieces or stick to one that you like?

My very first show that I did, I just had a bunch of burlesque drawings of models from the area and some random monsters, stuff that I like. And I did horribly, it just didn’t sell. So I did some pop culture, but I put my own spin on it because I didn’t want to be bored. They sold, they did remarkably better, and then it also brought people in to buy the stuff that I like, the stuff I just made for me.

How much time do you tend to spend on a piece?

It really depends on how big the piece is, how complicated it is.

How do you find time to work on your art?

I have a full-time job, I’m a graphic designer. I wake up early, and I do it [paint] in the morning, and then I come home and I do it in the afternoon, and I’ll do it here and there on the weekends.

Where do you display your art?

I do a lot of Comic Cons, I’ve started to do more craft shows. But you guys saw me, the Highland Square Neighborhood Association saw me, it seemed like there was nobody there [at the craft show], and it was real dead all day, and strictly financially speaking I broke even, which was fine, but the fact that you guys are here, the fact that some people in the neighborhood saw me, that’s a win. And if I could do that and make some money at some other Crafty Marts, why not?

What's the most rewarding part about what you do?

Getting an emotional response from people. If it makes them happy, if it makes them shocked. When I go to conventions, some people are real into it, and that’s awesome. What is the artist community like in regards to fellow illustrators in the area?

In this particular area, I can count on one hand the similar suited artists: Matt Miller, Shawn Coss (he does AMN Clothing).

Every month I do this thing called Dr. Sketchy’s Anti-Art School. So if you draw or just like to hang out and drink and listen to jokes, it happens every month at Jilly’s Music Room.

Why do you continue to do this?

It’s something I always did and do, the fact that I can make money off of it is really awesome. If one day I could either open up my own studio or set up a brick-and-mortar location where I have a space to work and other similar-minded artists working, being able to sell things. That would be amazing. But I have to get enough clout and financial backing in order to do that.

How do you deal with problems that arise?

It kind of depends. Most of the time, since my process is “make a mess then fix the mess,” if I’ve made a miss, if something is wrong, I can usually fix it. Sometimes, I’ll just start over.

(Points to collage in frame) That is a big crazy collage of all things Akron. It was in the Akron High Arts Festival this year. So when I was doing it, my original idea was to have a very simple-looking skyline of Akron, very solid colors, and then have this big monster blimp coming out of the sky, like pushing out of this weird portal thing in the sky. And I did the drawing and I was really happy with the way the drawing came out. And then I started painting it… It didn’t go so well. I couldn’t fix it. Frantically I emailed the people going “Hey, I messed this up real bad.” So I had three weeks to get this thing done. And they were like “Well you can do anything you want as long as it fits within the description that you gave us.” So that’s where that came out of. Honestly, I’m much happier with the way it came out than even if the one I had started with had gone the way it was supposed to. 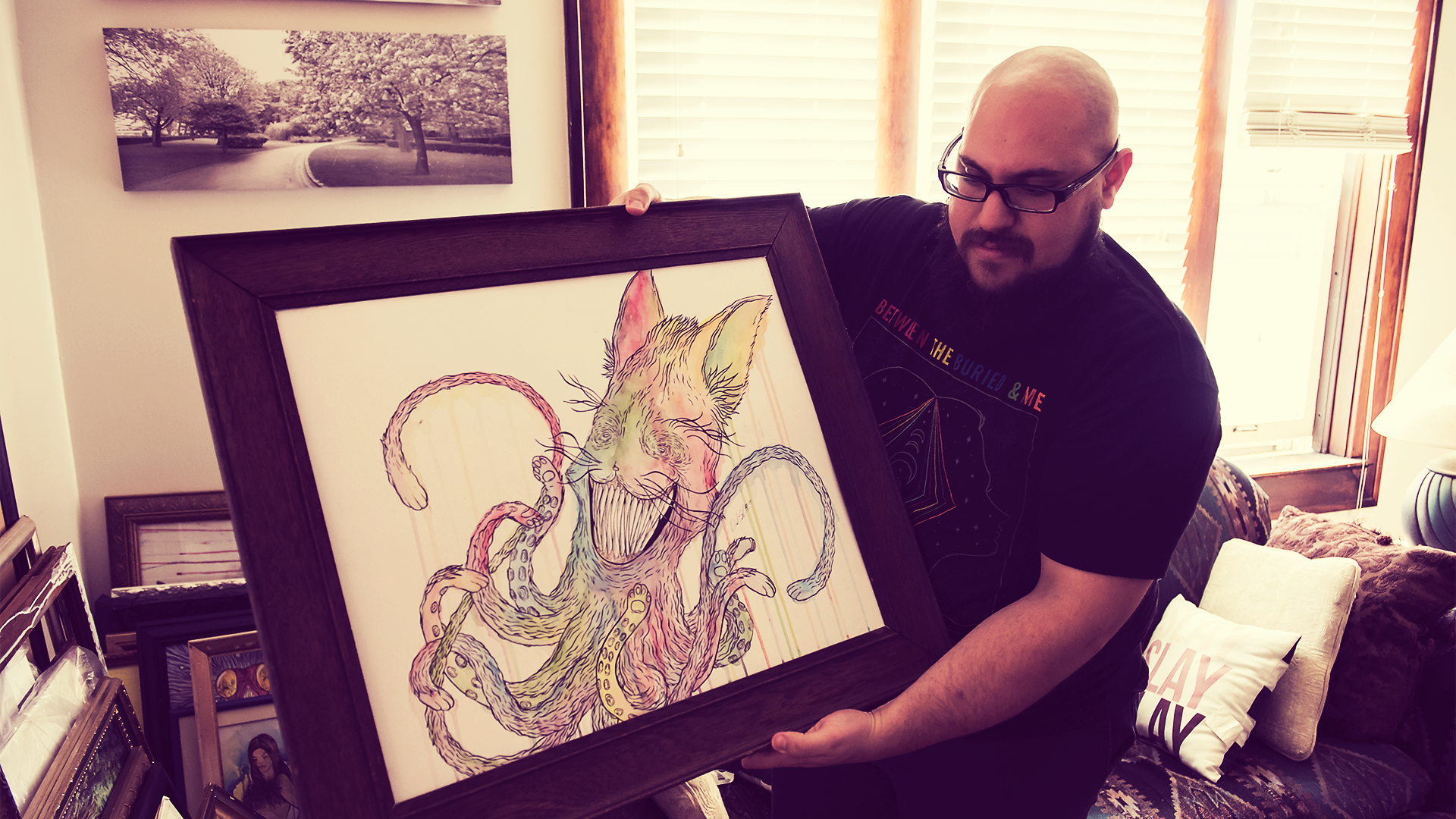 So what's next for you?

Right now I’m working on paintings for two shows, I have a solo show both at different Nervous Dog locations. One is in December and then one is going to be in June. And they’re going to be two different series.

And I’m going to be releasing a set of Star Wars stickers, weird looking Star Wars paintings, in December when the movie comes out.

And throughout the month [for Inktober] I’ve been doing 31 Days of Octospock. They’re all different. Once that’s done, I want to put out a zine that has all 31 Octospocks, a limited zine. 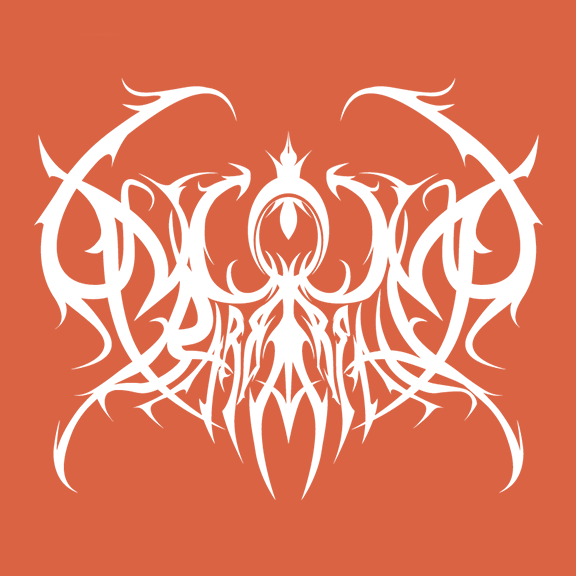